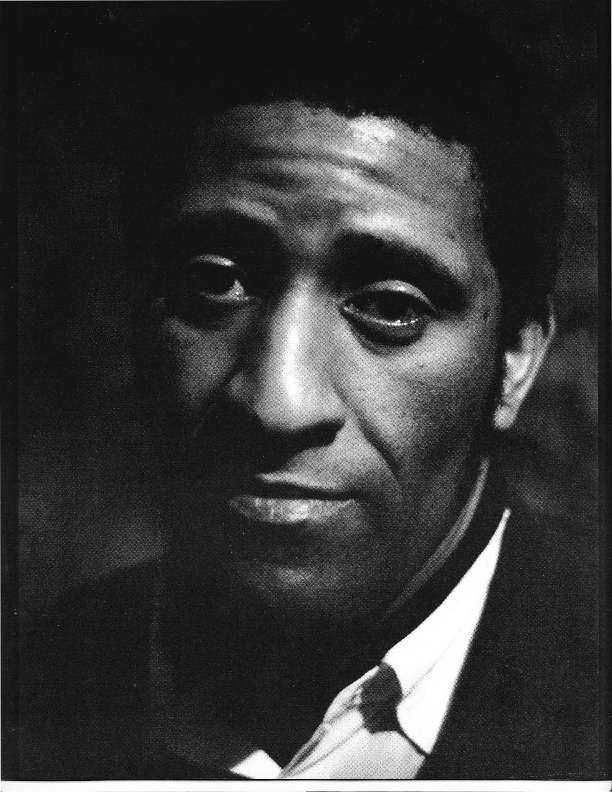 A Bridge to Holland

This was Sonny's unexpected reply when Dutch jazz critic and presenter Michiel De Ruyter asked him his reaction to drummer Hann Bennink after the trio's first set on May 3, 1967 at the Academy of Visual Arts, Arnhem (Academie voor Beeldende Kunst).

My interest in Sonny Rollins grew just as naturally as my obsession with Jimi Hendrix, who brought me to discovering jazz in the first place. I absorbed as much rock and roll as I could as a freshman in high school. At the time, I was much more familiar with loud guitars and vocals than horn players or instrumental music. I was the guitarist in the high school jazz band in Silverton, OR and we were performing at a state Big Band competition in front of a panel of judges who would offer critiques after each performance. When we performed the Dizzy Gillespie tune, "Manteca," I played a distorted solo more like Frank Zappa than Freddie Green - whom one of the judges suggested I begin listening to, along with Wes Montgomery, if I wanted to play jazz. I began collecting as much jazz as I could find, beginning with classics like, "Kind of Blue," by Miles Davis and "Saxophone Colossus," by Sonny Rollins.  I remember beginning to hear how these musicians played in a way that I never heard Hendrix play. I began realizing that this music was much deeper and more complex than I'd ever imagined. From then on, everywhere I went I carried a guitar and a backpack full of jazz cd's.

Eventually I moved to Chicago to study jazz in college. One of my instructors was Bobby Broom, who had previously played a brief stint in Miles Davis' band and was also currently playing off and on with Sonny Rollins, among others. Years later, I had the pleasure of hearing Broom and Rollins play together in NYC at Central Park, and again here in Portland at the Schnitzer Auditorium.  I tried meeting up with Bobby after the show but it was only after I'd left and crossed the river that he called me and told me he'd planned on introducing me to Sonny!

As a full-time music teacher, it is difficult to find time in between teaching to work on my own original music. It's even harder to sit down and enjoy listening to records let alone write about them. When I was asked to write a music column, I knew I would have to reserve free time to really do some focused listening. Deep, like how I used to listen when I'd carry a backpack full of CD's and listen on headphones while I wandered around town. As the holiday season approached, my wife secretly poked around to find a record I might not already have in my collection. She asked if I had heard about these recently discovered recordings of Sonny Rollins in Europe. I told her I was thinking about writing about the recordings for this column, and she then surprised me with the records, wrapped for my birthday! We recently celebrated 10 years together but in that moment I truly knew she was the one.

I was aware of jazz musicians traveling to perform all over Europe in the 60’s, while rock music took over the airwaves in the States. Jimi Hendrix's, "Are You Experienced?" would be released about a week after these special Sonny Rollins performances occurred. Later that month, Janis Joplin would headline the Monterey Pop Festival. It was not an easy time to be a jazz artist in the United States. Sonny described in a recent interview with Downbeat Magazine, “I had first come to Europe in 1959, and it was really wonderful, because the European people had a different idea about music,” Rollins said. “The American idea of live music is more like, it has to have a commercial value to it. And that’s OK. But in Europe, they know all about Bach and Brahms ... . They don’t know the history [here] in the United States. [That’s] not a putdown of the United States, but the people in Europe love jazz and recognize the value of jazz. They seem to have a deep understanding of music, plus they treated Black musicians much better than we were treated here in the United States. All of that made Europe a wonderful place.”

Enough has been written about the physical features of this very special release (3 Vinyl LP's or 2 CD's with very elegantly detailed liner notes featuring beautiful photos and great interviews with band members.) Instead, I would like to share my own emotional reaction to listening to the full 2 hours on repeat while reading the liner notes. Sonny Rollins in Holland features performances from VARA television studio (Hilversum), Go Go Club (Loosdrecht) and Academie voor Beeldende Kunst (Arnhem) in the Netherlands between May 3 and 5th, 1967. These dates came about unexpectedly following some gigs in England when Sonny was asked to play a short tour in the Netherlands. 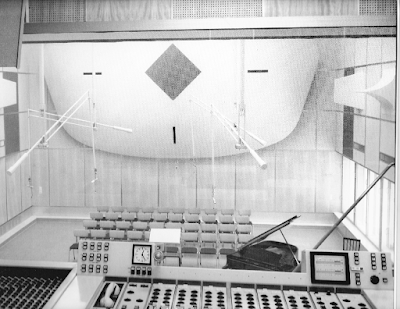 The studio recordings are very clear - they have an eerie quality that reminds me of our present circumstances, which prevent us from performing in front of an audience. In the recording, you can hear how empty the room is while they played at 10:30am. The studio performance was a much needed warm up for their gig later that night at Go Go Club in which the recordings are more raw. The band is in their element, performing in front of a completely blown away audience that was perhaps not ready for Sonny's renditions of familiar tunes like, "Sonnymoon for Two." The liner notes describe an audience member who complained to his wife that it didn't sound at all like Lionel Hampton's version. Another man was supposedly so worked up that he cut off his own necktie. The band made it clear they didn't care whether the audience was feeling it or not, they were going to swing hard! 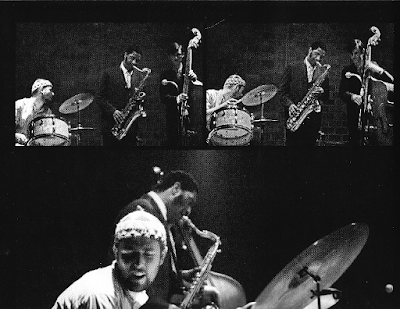 One of the venues from this tour, described in the liner notes, is something I imagine as I listen to the records again and again. The Persepolis - 65 feet long x 20 feet wide, egg crates on the ceiling, water dripping from the ceiling and so little oxygen that the candles would burn out. There is a great pair of pictures showing a young Dutch man sitting in a chair less than 2 feet from Sonny with his head turned inside out from the energy in the room. Imagine seeing Sonny Rollins play at a club in Amsterdam in 1967! Damn! 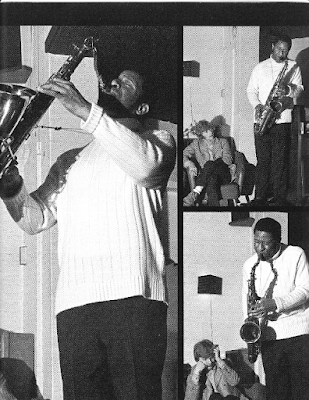 Sonny played with one of his most unique bands in Holland. Hann Benninck and Rudd Jacobs filled out a trio like Sonny had never led before. They had very big shoes to fill following his previous bands with Elvin Jones, Shelly Manne, Roy Haynes, Percy Heath, Wilbur Ware, to name just a few. The pressure they felt to follow Sonny's prowess only fueled them to listen and react on a level they'd never played at before. Fellow musicians who attended these performances commented that it was perhaps the best concert they had ever witnessed. Sonny is here, at the top of his playing, the peak of his creativity and in the midst of deep spiritual development. He had been a close friend of fellow tenor master John Coltrane; the two were musical brothers. They would meet at Sonny's apartment to practice and share deep discussions for hours. Coltrane was sick with liver cancer and was turning down engagements at the Village Vanguard to practice. Coltrane died two months after these dates from Holland. It is believed that these performances were heavily influenced by Sonny's visits with Trane.

Sonny took a break from recording between 1966-1972. He was not happy with his own recordings when he heard himself. He spent much of that time studying yoga in an Indian ashram. It shows in his playing, as he has patience and focus in his restraint to sit back and listen to the bass and drums, but also will take control and lead the band wherever he wants to go. Sometimes, he will intentionally launch them into an unexpected song in the midst of another piece. Yet, it's as fluid as the water dripping from the ceiling. He quotes both Chopin and Ellington in his solo and somehow makes them sound as one. Sonny said... "Jazz is the concept of being able to relate to something spontaneously, intuitively, and honestly, and beatifically." 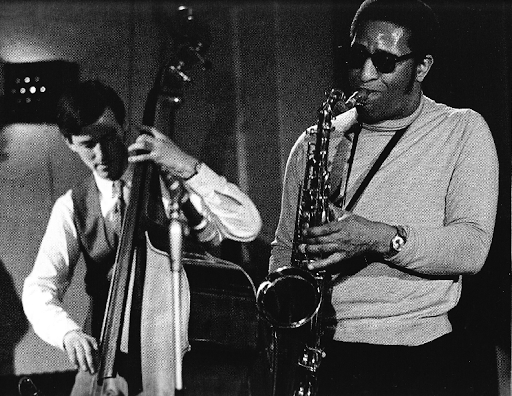 We are so lucky to have these recordings to give us a glimpse of what he sounded like during his sabbatical. Sonny, who recently turned 90 years old, still speaks as a man who is excited and happy to see this album released, even over 50 years later!

I have had all 3 LP's playing on repeat for over a week now and haven't even begun to tire of them. Sonny's tenor voice is like hearing your grandfather or uncle retell your favorite stories in a different improvised fashion. Hearing this collection of unearthed gems has been one of the brightest joys for me as we end the year. Like an unexpected visit from an old friend when you need them most.

For more information about Elliot’s music and instruction please visit

Posted by Professor Moongriffin at 8:12 PM